Waiting for the Rain..

Posted on December 14, 2013 by wineandwilddogs

The lions have moved overnight to a far distant Kopjie, calling faintly as we awake this morning and brew a cup of La Lucie coffee. Natasha Anderson, of the Lowveld Rhino Trust, has stayed the night and shares the early morning with us before continuing on her way to meet Jackson, chief rhino monitor. Heartwarming news, her team in the Save Conservancy has located a female rhino presumed dead, but discovered now very much alive, with a new calf at foot! Great news to start our day. 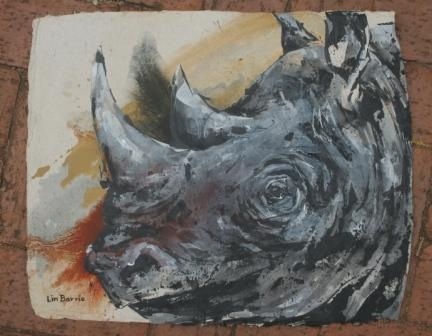 Clive has a bowl of oatmeal porridge and now drives away towards Buffalo Range with a bemused expression on his face…half anticipatory, half dread. The day ahead is an unknown- he is on his way to meet the two planes that will shortly arrive at Buffalo Range Airport and spill out their cargo of twenty Ministers and Aides from Harare. All will proceed to the continued meeting of Chiefs, Conservancy members and potential partners, at Hakamela, Malilangwe, where the Chiefs have over- nighted, following yesterday’s energetic meeting. Basil Nyabadza, chairman of the Save Valley Conservancy, chaired the proceedings yesterday, and rightly gave everybody in the room free rein to express their views. As could be expected, some views were restrained and considered, others more impassioned….this was a valuable forum for everyone concerned to have their say.
Today could be groundbreaking if the Ministers feel that they have had sufficient feedback from everyone concerned. Decisions could be made which will enable us to go forward together, unified, and I am hopeful that some clear direction will emerge. Zimbabwe has such special people and such huge Tourism potential, it would be wonderful to see that develop, embracing sound Conservation values.

The heat builds during the day, as I struggle to concentrate and finish the Penman tartan cravat that I am making for Dad’s Christmas present. Still no rain..and we need it, new blades of grass beginning to wither, and I am wilting…

Sitting upstairs at my sewing desk, same level as the tree canopy, I can look over the garden below me as I work….

paradise flycatcher nest in my garden

I am watched closely in turn by the suspicious, beady eye of the female Paradise flycatcher who is incubating her eggs on a fragile, cup-shaped nest of spiderwebs, swaying on the end of a Brachystigia tamarindoides branch, almost within arm’s length of me…
When the showy, long-tailed male arrives to take over incubating duties, she sees him off with angry chatter, refusing to leave her post. Perhaps my presence has decided her that he is not reliable enough to watch the nest!

After a lengthy period he manages to persuade her to relinquish duties to him!…

Lin Barrie The Save Valley Conservancy stretches along the upper reaches of the great Save River in the south east of Zimbabwe. The Gonarezhou National Park laps against the southern banks of the Save River and between these two nestles the Malilangwe Wildlife Reserve. These three celebrated wildlife areas form part of the Greater Limpopo Transfrontier Conservation Area, (GLTFCA)- a unique wilderness jewel which is home to the “Big Five” (endangered Black and White rhinos, elephants, buffalo, lion, leopard) and the ”Little Six” (Klipspringer, Suni, Duiker, Steenbok, Sharpe's Grysbok and Oribi). Endangered African wild dogs, Cheetah, Brown hyena, Bat-eared foxes and a host of special birds and plants contribute to the immense variety of this ecosystem. Communities around the GLTFCA contribute to innovative partnerships with National Parks and the private sector, forming a sound base on which to manage social, economic and environmental issues. This is home to artist and writer Lin Barrie and her life partner, conservationist Clive Stockil. Expressing her hopes, fears and love for this special ecosystem with oil paints on canvas, Lin Barrie believes that the essence of a landscape, person or animal, can only truly be captured by direct observation. Lin Barrie states: “Through my art, and my writing, I feel an intimate connection with the natural world, and from my extensive field sketches of wild animals, people and landscapes, I create larger works on canvas. Lin's work is in various public and private collections in South Africa, Kenya, Zimbabwe, Australia, England, Canada, Sweden and the United States of America. She is represented by galleries in South Africa, Zimbabwe, England, Kenya and Florida, USA.
View all posts by wineandwilddogs →
This entry was posted in Africa, african wildlife, birds, conservation, eco-tourism, gardens and flowers, Lowveld Rhino Trust, rhinos, Save Valley Conservancy, Uncategorized, zimbabwe and tagged birds, conservation, La Lucie coffee, Lowveld Rhino Trust, paradise flycatcher, Rain, rhinos, Save Valley Conservancy, tourism, wildlife. Bookmark the permalink.

This site uses Akismet to reduce spam. Learn how your comment data is processed.