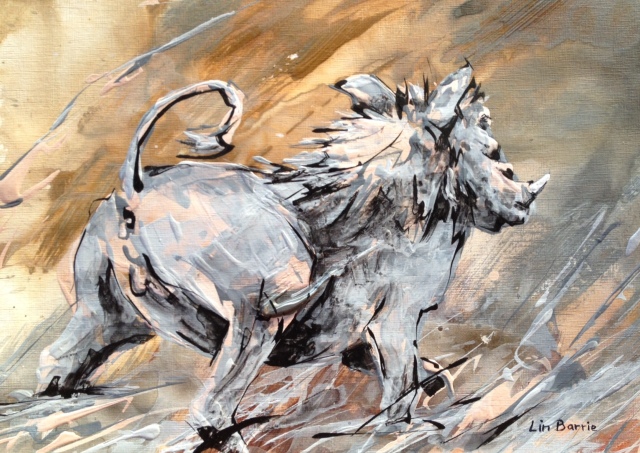 Once a upon a time three friends, Nguluve, Libwatsani and Denge, were strolling together down to the game trail. In those days Nguluve, the Warthog, looked much the same as he does now, except for a long, well-shaped nose in place of the ugly, flat one you see Warthogs wearing today. Denge, the elephant shrew, on the other hand, had a snub little snout instead of the long, thin nose (which so resembles an elephant trunk) that his relatives have today. The third friend, Libwatsani, had a tiny little mouth, altogether different to nightjars today, which have the widest mouths of all birds.

Nguluve happened to glance upwards and saw a beehive in the top of a tree. His mouth watered at the thought of the sweet, sticky honey and hurriedly climbed the tree, closely followed by his two companions. In his haste he knocked the hive to the ground. Leaning out to try and catch it, he lost his grip and tumbled down after the hive, falling heavily onto that long nose of his and squashing it flat! He sat up gingerly and felt the damage, squealing with dismay at what he found.

Now Libwatsani, watching from up in the tree, found the sight of the falling warthog and his distress so amusing, he could not stop laughing. As he laughed his mouth split a little, and then more and more, and by the time he had finished laughing, his mouth had stretched around his head from one side to the other!

Denge also found Nguluve’s plight amusing, but he saw Libwatsani’s mouth stretching and growing and, not wanting the same to happen to him, he muffled his laugh and pushed his lips forward, making a whispery “foo foo foo” sound .That is why Denge nowadays has such a long snout and why he laughs in that muffled “foo foo foo” way of his.

The Birds Choose a Leader

A long time ago the birds decided to choose a leader. Word was sent to every bird to come to a meeting at a certain place in order that a leader might be appointed. Messengers went out in all directions and when Pau the Ostrich heard it he thought it a foregone conclusion that he, being the largest bird, would win and he was very confident of success.

Gama the Eagle, was equally confident, believing that eagles were the most important birds because they could fly the highest. The little birds could not be sure if the choice would be between stamina or intelligence, but they considered that even they had a good chance.

On the appointed day every bird arrived, all shapes and sizes and colours, from tiny Chidichi the Waxbill to Pau the Ostrich. The elders formed a council to decide which talent their leader should possess and after much argument and discussion it was decided that the leader would be the bird who could stay in the air the longest.

Pau complained bitterly about this unfair decision, but no one listened to him. Finally he walked off in disgust, muttering crossly that the other birds were all conspiring against him. So, even today you will find Pau living in dry, barren and open areas where there are not many other birds.

The smaller birds, who had thought they might win by intelligence, knew they stood no chance against the more powerful fliers and many dropped out. But little Matengwane, the Fork-tailed drongo, who knew he had no chance at all by relying on his own flying prowess, decided to use his intelligence to win.

When the starting signal was given, the assembly of birds rose into the air amid a thunderous flapping of wings. Matengwane picked out Gama, the largest and strongest eagle, and he gently settled on Gama’s back and crouched down among Gama’s feathers, unseen by anyone.

One by one the smaller and weaker birds dropped out, exhausted, until only a few eagles remained high among the clouds. Finally, the weaker eagles gave in to Gama, who was still unaware that he carried a secret passenger. When Gama saw that he was the only bird left in the sky, he descended. All the waiting birds started to cheer him. Then, just as Gama landed on the ground, someone shouted “Look! There’s one bird still flying!”

Sure enough, Matengwane was still in the sky and, according to the decision of the council, he must be appointed the leader of the birds.

That is why Matengwane, the Fork -tailed drongo, is the first bird to wake in the morning and the last to go to sleep at night.

How Khumba Got a Flat Nose

In the olden days, Khumba the Bushpig, had a beautiful, long and slender nose of which he was very proud. One morning he was on his way to the river for his mud bath when he heard a whooshing sound close to his ear. It was Gatowa the Lilac-Breasted Roller, who was doing one of his magnificent flying displays. He shot upwards into the sky-straight up and up and up. Then he did a backward somersault and dropped down out of the blue like a stone, straight to earth. Then just when everyone watching was holding his breath and about to shut his eyes to avoid seeing Gatowa crash into the ground, this clever bird swooped up in a graceful curve and alighted neatly on a nearby branch.

Khumba thought to himself, ‘Gatowa may not have so long and handsome a nose as mine, but he really does fly very well.’ Then he called out, “Good day, Gatowa”.

“Hello there,” replied Gatowa, as he perched on twig nearby to pass the time of day with Khumba.

“Tell me, Gatowa,” said Khumba, “why do you do that dangerous dive?”

“That’s to impress my wife so that she stays with me. See, there she is, watching.” Gatowa pointed out his wife who was smiling fondly at her husband from a branch above their heads.

“Where is Mrs. Khumba today?”

“Oh, she’s off in the bush somewhere,” replied Khumba vaguely.

“See what I mean?” Gatowa said. “If you do that dive, she’d be so proud she’d stay with you all the time.”

Khumba considered this and decided it would indeed be useful to have his wife nearby. She could help him carry things, and so on. “Yes, you’re right,” he agreed. “Could you teach me?”

Off they went, Khumba right behind Gatowa. Straight up into the sky they flew – up and up and up. Then came the somersault, which Khumba managed well enough for his first try, though it would probably improve with practice. Then Gatowa dropped down towards the ground. Now Gatowa had done this many times before and he knew just when to lift up and how to flap his wings to come out of the dive at the last moment. But Khumba, who was much heavier anyway, and who was following much too closely behind Gatowa to see exactly what happened, was not ready. He crashed to the ground…..very painfully…..right on his nose!

You can imagine that after that bump, Khumba’s nose was quite flattened at the end. Gone forever was the long tapering tip that he used to be so proud of. And you won’t find Khumba flying again – not for a long, long time.

Once upon a time there was a village where Gama the Eagle, and his good friend Kuku the Cockerel, both lived. One day Kuku went over to Gama’s hut and called out, “Good day, Gama.Would you please lend me your razor so I can cut my children’s hair?”

Gama obligingly handed Kuku his razor and Kuku returned home to cut his children’s hair. When he had finished he put the razor down in safe place, intending to return it later. However, it so happened that his youngest child found the razor, took it outside to play with it and lost it.

A few days later when Gama wanted to cut his own children’s hair, he asked Kuku, “Where’s that razor l lent you? Can I have it back now?”

Kuku went and looked, but it was not where he had left it. His wife called their children together and asked, “Where is Gama’s razor?’’But the chicks did not know and the smallest one, who had lost it, had by now forgotten.

Gama said, “Kuku, I want my razor. If you don’t give it back to me, there’ll be trouble.” All the chickens went out and searched, but there was no sign of the razor.

Then Gama said, “Kuku, if you have lost my razor I will eat your children.”

And that is why today there is no longer friendship between Gama and Kuku. And that is why when Gama is around Kuku is so nervous and his wife shelters her children under her wings. Then, when Gama has gone, the chickens all rush about searching here, there and everywhere for the lost razor, which has still not been found.

This site uses Akismet to reduce spam. Learn how your comment data is processed.